The final race for the 32nd edition of Antigua Classic Yacht Regatta, sponsored by LOCMAN, was held off the stunning south coast of Antigua in relatively moderate conditions of 15 knots south of east. Whilst the breeze had eased from the previous three days of racing, the intensity of the competition was at a crescendo, eight of the classes were decided on the very last race.

“Severine was built in 1993 and she is a replica of a 1927 two-masted gaff schooner designed by Alden,” commented Gonzalo, a member of the famous Botin family from Santander, Spain. “I saw her for the first time in 2003, before I competed in the Mini-Transit, and I loved her from first sight. She is a lovely little schooner, really beautiful. This is the first time Severine has raced at ‘Classics, it is a lovely regatta, full of tradition, and we have loved coming here and racing with the other beautiful yachts. Most of the crew have raced with me on the Class 40 Tales, it has been really good to be able to do all of the manoeuvres and sail changes with such an experienced crew. When you are cruising you take it a lot easier! After the regatta, we will sail to Columbia, and then through the Panama Canal to the Pacific, we aim to meet up with Adix (the 213’ three-masted schooner, owned by the Botin family) in Tahiti, and sail the Pacific on to New Zealand for the 49er Worlds, where my son, Diego Botin will be competing.” 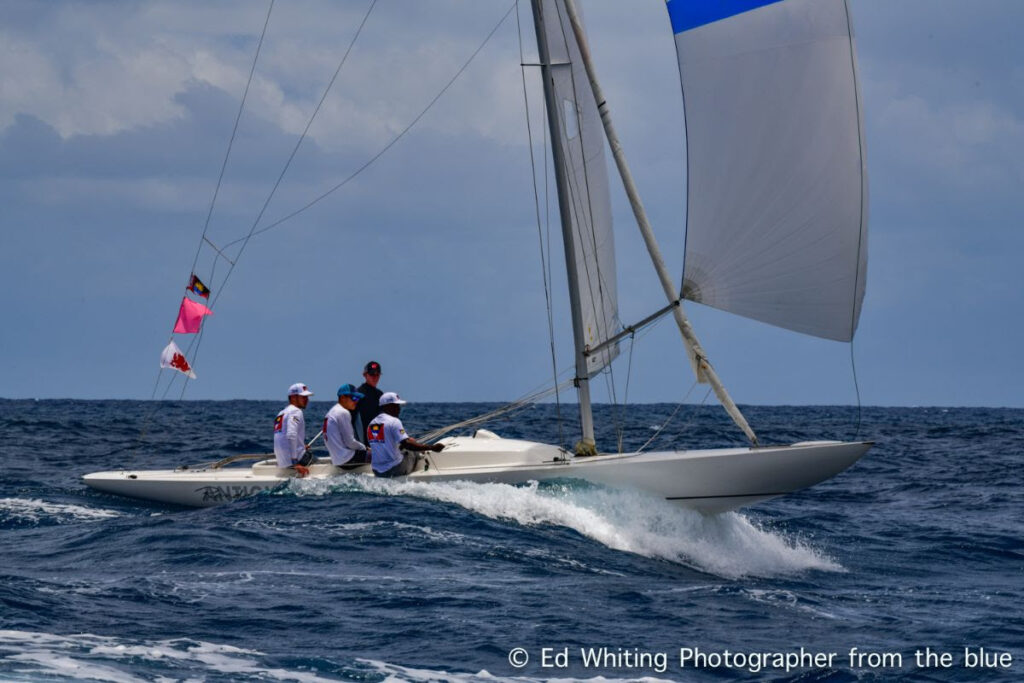 In the Historic Class, Jonty & Vicki Layfield’s 1972 S&S Swan 48 Sleeper, finished the regatta off in style, winning the last race, to remain undefeated in four races. There was a three-way tie for second place! Geoffrey Pidduck’s 1907 Six Metre Biwi Magic, took the runner up spot on countback from Tommy Paterson’s Yachting World Diamond Rita, skippered by Tanner Jones. Markus Bocks’ 1972 S&S Swan 48 Montana was out of luck, finishing just off the podium. 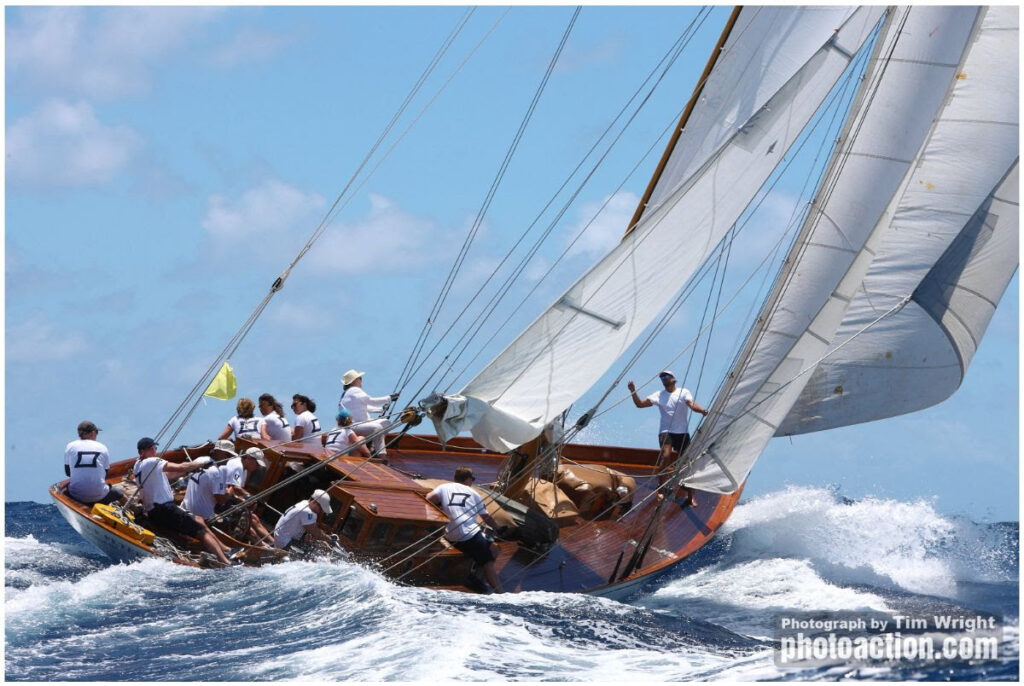 The Vintage Other Sail Plan Class went to the wire, Mathew Barker’s 1929 65′ Alfred Mylne sloop The Blue Peter, won today’s race. However, the class winner for the regatta, by a single point was the 1936 41′ Rasmussen sloop Seefalke II, skippered by Oliver Greensmith. Carlo Falcone’s 1938 79′ Alfred Mylne yawl Mariella was runner up for the regatta, and The Blue Peter was third.

Skipper and owner of The Blue Peter, Mathew Barker, was celebrating his birthday today with his crew who nearly all come from London, UK. “The Blue Peter crew gave me the best birthday present ever – a race win!” laughed Mathew Barker, who has been racing classics for 20 years. “It’s always the same, by the end of the regatta, the crew who are guests on board, have got really good, at their jobs, they were brilliant today! Now I am a father I behave myself a lot more in the evenings, but maybe tonight that will change because we have babysitters.”

In Classics Other Sail Plan, the Frary family racing their 58′ ketch Aarluuk, finished the regatta with a perfect four bullets. The 1957 52′ yawl Mah Jong, skippered by Alex Goldhill, was second. The 1965 53′ S&S yawl Hilaria was third for the regatta.

In the Spirit of Tradition Class, Chloe & Mike Hough’s Spirit 64.5 Chloe Giselle won today’s race to win the class. Second in today’s race lifted Blackfish to second for the regatta by a single point, the 49′ Jim Taylor sloop is owned by Carolyn and Commodore Ron Zarrella from the Great Harbor Yacht Club. Alexis Lepesteur’s 80′ sloop Volterra, designed by German Frers and John Alden, made the podium for the regatta. 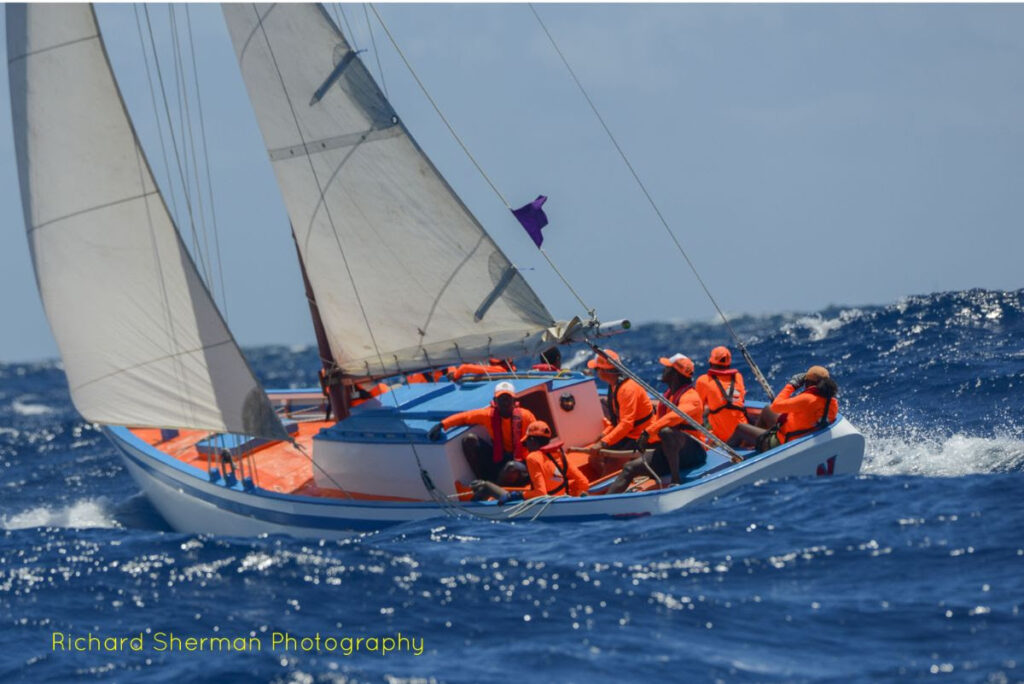 In the Traditional Class, Alexis Andrews’ Genesis, built by Alwyn Enoe, won today’s race to win the class. Charles Morgan’s Sweetheart, built by Zepharin McLaren, was very much in the running, but a broken boom led to the team’s retirement from the last race, resulting in second for the regatta. Charlotte & Billy Hooijdonk’s New Moon, designed by Bernard Compton, was second today and third in class.

In the Tall Ships Class, Chronos, skippered by Ingo Martens, won the battle of the Klaus Röder 157’ schooners, just ahead of Rhea skippered by Nico Goettert. The 203′ Hoek designed schooner Athos, with Captain Tony Brookes was third. 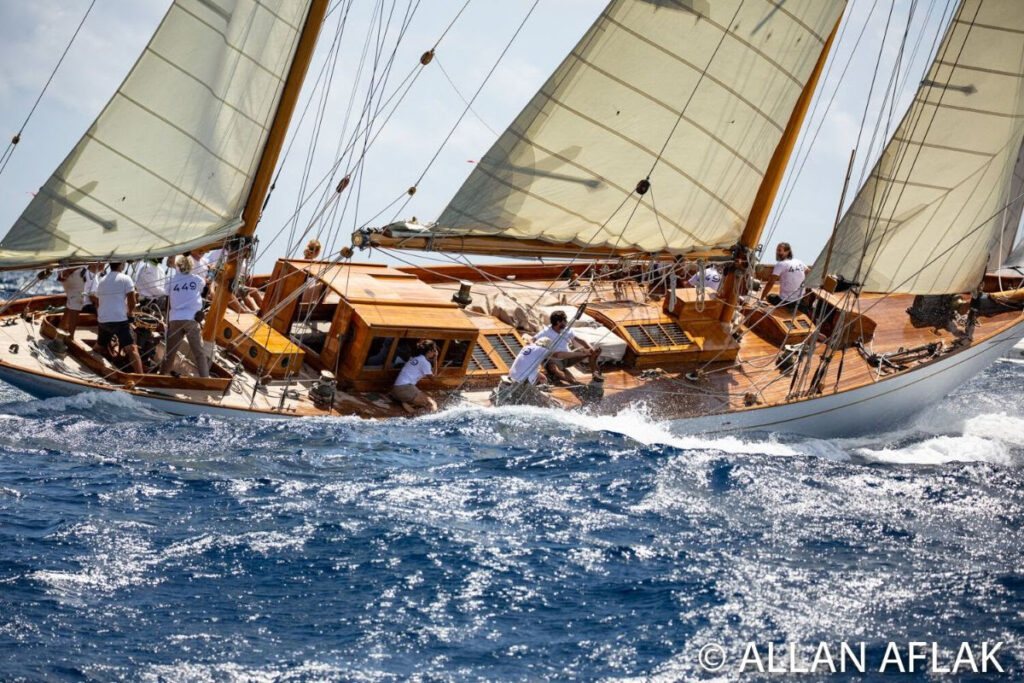 A special mention must go to one of the finest yachts to grace ‘Classics this year, the 1936 72’ ketch Eilean, skippered by Stefano Valente. “For me Eilean is a most elegant boat,” smiled Stefano. “With all her sails up, it is great to sail her, here in Antigua. I have sailed her for nine years, and she is amazing every day. Racing her in trade winds is scary sometimes, you feel the power of the boat, she is very fast but we don’t push too hard, as we want to keep the boat as safe as possible. Eilean has sailed a lot of miles in the last year, including a passage to Mexico. She will be shipped to London, England before returning to the Mediterranean via Portugal eventually to return to her home in Viareggio, Tuscany, for a well-deserved holiday and a refit.”

The Antigua Classic Yacht Regatta Prize Giving was held on the lawn of the Antigua Yacht Club tonight. A report on special prizes and news from the Gig Racing & Cream Tea Party, to be held 23 April, at the Admiral’s Inn, Nelson’s Dockyard will follow.